Many cities across the country have decided to increase their minimum wages above that of their state. Economists of all political stripes, even those who are broadly in favor of higher state and national minimum wages, are opposed to these policies because of the harm that they will do to a city's growth and employment, especially the employment of the lowest-skilled.

David Neumark remains the best source for balanced analysis of the minimum wage in theory and practice. This piece published by IZA is an excellent and accessible summary of the issue.

A minimum wage prices the least-skilled workers out of employment because firms would have to pay them more than they are able to provide in terms of productivity and revenue. As a consequence, some firms will shut down, some will substitute higher-skilled labor, and others will increase automation. In the end, low-skilled workers are shut out of the labor market and are denied the opportunity to gain experience through on-the-job training, thereby exiling them from employment now and perhaps into the future.

Because the least-skilled are the most vulnerable to job loss under a minimum wage, empirical studies tend to focus on the effects on 16-19 year olds or on industries, such as restaurants, which are relatively reliant on low-skilled workers. Competently done studies that look at these groups tend to find that increases in the minimum wage do indeed lead to lower employment. Studies that focus on overall employment are not as uniform in their findings. This has more to do with the fact that some higher-skilled types of labor see higher employment as they are hired to replace the now-overpriced low-skilled workers, thereby making statistical significance more elusive.

Because Seattle has had its minimum wage in place the longest, it's the city that has been analyzed most frequently in the debate over city minimum wages. For the most part, the analysis that has been done has been pretty shoddy. One common piece of shoddiness is a failure to control for changes in overall economic conditions. For example, one could look at Seattle before and after the higher minimum wage was in place and see that employment has risen over time. One might conclude from this that the minimum wage did not harm employment, and might even have helped it. But the relevant comparison is to what would have happened in the absence of the higher minimum wage, which means that general trends need to be controlled for. Thus, it's not enough to look at Seattle alone, it must be compared to what happened in the entire metro area, which was presumably facing very similar long-term trends and the same business cycle.

In my analysis, I look at employment and labor force trends in the city of Seattle relative to the entire Seattle metro area. You can't see much by simply comparing the two data series unless there is some way to control for the normal trends underlying them. These trends are the business cycle, which should affect both in very similar ways, and the location-specific trends that would make the city and the metro area grow at different rates regardless of changes in the minimum wage. To control for these trends, I simply take Seattle's share of metro employment and see if there are any changes to it that are coincident with minimum wage policy. The result is the following chart: 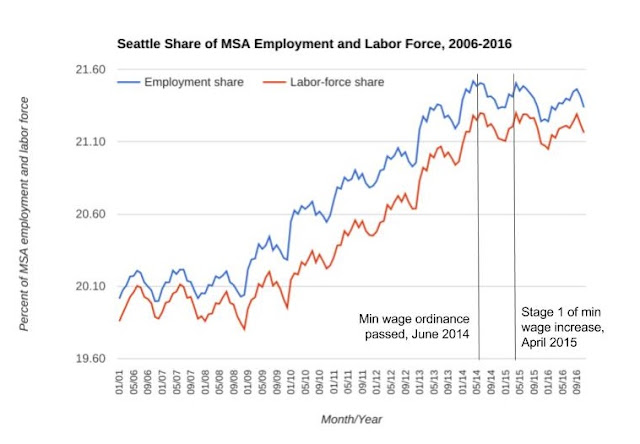 The chart looks at household employment and labor force from 2006 through 2016. As you can see, starting with the beginning of 2009, Seattle's employment and labor force were both growing at a faster rate than its metro area's. Thus, Seattle's economy was becoming larger relative to the metro area as a whole. This trend came to a halt in June 2014, however, the exact month in which Seattle passed its minimum wage increase. Because hiring and expansion decisions are made with future conditions in mind, the deleterious effects of the minimum wage were felt as soon as it was passed. The first of the scheduled minimum wage increases occurred in April 2015, at which time Seattle's relative employment took an other downward turn, which is indicated by the fact that the city's employment share in April 2016 was lower than in April 2015. (Note that there appears to be some seasonality in these ratios, so it's best to compare year-over-year changes.)

Unless someone can point to other events that occurred precisely at these times, this picture shows very clearly that Seattle's minimum wage law had a negative effect on the Seattle labor market. Unfortunately, this chart doesn't provide us with an estimate of the size of the effect in terms of the change in the level of employment. It should, however, put to rest the notion that the city's minimum has had anything but a negative effect on the city's employment.