The graphic below showing the changing distribution of US income has making the rounds for over a year, including in this story in the FT. It sure looks scary, doesn't it? That big mountain of super rich people has just been growing and growing since 1971, while the middle class has been getting squashed down. Boy oh boy has the US become polarized! Yikes! What inequality!

The thing about the graphic is that it's complete nonsense. If you look at what's been happening. the income distribution has been stretching out as nearly every low-income group (except the very very poorest) has become smaller, while higher-income groups have become larger. But at what cost? If this graphic is to be believed, it's that we've let the benefits of growth become so skewed that we've created a class of super-rich who have become distinct from the rest of us. But it's nothing more that a graphical trick. By truncating the x-axis at $200k and collecting together all those above that income level into one group, this apparent growing upper class will happen even if there is no change in inequality.

To illustrate this point, I've created a simple graphic that does exactly the same as the one above. The blue bars are represent the income distribution in year 1, and the red bars are the distribution in year 2. Median income rises, but there's disproportionate growth in the group of super-rich folks ($110k and above in the example). Awful, isn't it? 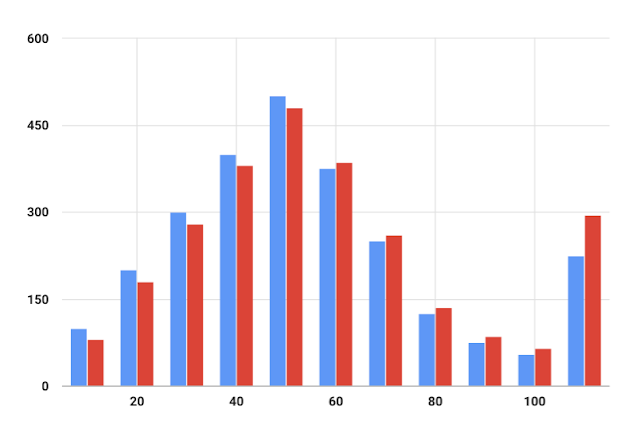 It turns out that the data underlying the above figure is nothing but good news. The figure below removes the arbitrary top group and displays the whole income distribution. Every group from the lowest to the median sees a decrease in the number of people, while all higher groups see smaller increases. Is this change in the income distribution bad? If you think it is, then you're nuts. But it's exactly the same as the one right above, which looked so evil. 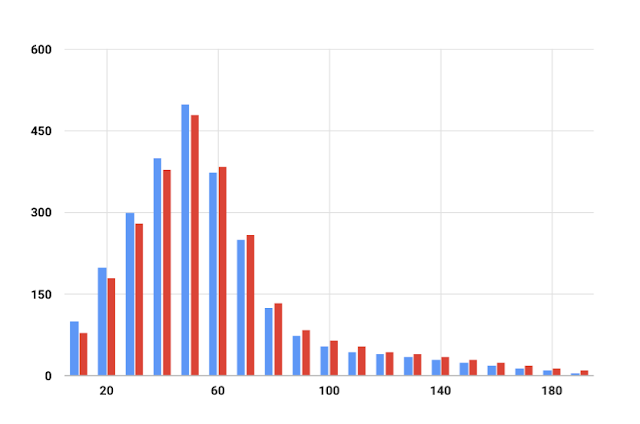