So was Detroit just uniquely irresponsible? Again, no. Detroit does seem to have had especially bad governance, but for the most part the city was just an innocent victim of market forces.

Actually, Melissa Harris Perry's claim that it was small government that did it is the winner for absolute dumbness, but she doesn't have a Nobel prize in economics to sully, so Krugman's comment wins for relative dumbness. 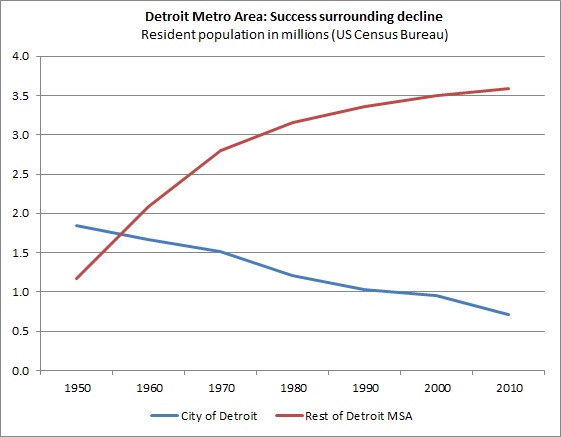 As you can see, the non-Detroit part of the Detroit metro area has grown continuously since 1950, although, like the rest of the Rust Belt, its growth has slowed over time. But when you take into account that the metro area was saddled with such a horrifically governed urban core, it doesn't look so bad.

In short, similar market forces buffetted the entire Rust Belt and the rest of the Detroit metro-area.  But Detroit is the only political unit among them that has filed for bankruptcy:  Pittsburgh hasn't, Cleveland hasn't, St. Louis hasn't, Buffalo hasn't, Wayne county hasn't, Dearborn hasn't, Pontiac hasn't, Livonia hasn't,...

I assume that, like me, very few of you have Nobel prizes in economics, but it looks to me as if the city of Detroit might have had some city-specific problems that led it to where it is today.

For anyone who is interested, Veronique de Rugy and Walter Russell Mead have some solid reality-based commentary on Detroit.