I'm beginning to wonder if they have even the slightest idea

Back in January 2010 our economic policy was beginning its drive down a bold new path.  The Obama administration had enacted a $900 billion stimulus package the previous year, and was embarking on a transformation of the economy: Obamacare, wind and solar power, Keynesian stimulus ad infinitum, etc.  In the meantime, the Fed was continuing its loose-money policies and maintaing interest rates close to zero.

The administration and the Fed were confident that their actions would set the economy on a path of prosperity, as evidenced by the rosy forecasts they made at the time.  Because neither has really strayed much from the path it set out on, it's fair to take a look at how their notion of the economy compares with the actual one.  Specifically, we can look back on the forecasts they made at the time to see how well their visions of the economy stack up against reality.

Here are two charts outlining the Obama administration's notion of how the economy works.  The forecasts are taken from the 2010 Economic Report of the President (Table 2-3): 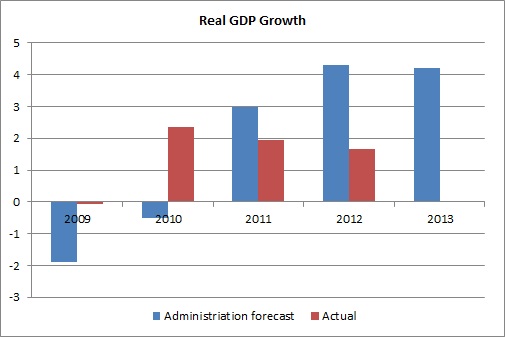 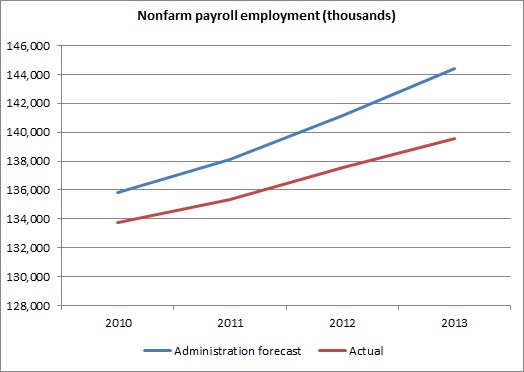 Hmm.  According to the Obama administration, the economy was supposed to be booming by now as a result of all the great things that had been done.  But it turns out that real GDP growth in 2012 was only 1.7 percent rather than the 4.3 percent that was forecast.  And despite Joe Biden's declaration that the President would focus on one three-letter word, J-O-B-S, payroll employment is nowhere near where it is supposed to be.  In fact, there are about 4.8 million fewer jobs than were promised by these glorious policies.

Perhaps the Fed was better at this than the administation.  After all, they're free from politics and have hundreds of PhD economists running around the place.  Well, it turns out that they know about as much about the economy as the President does.  Here are the forecasts from the FOMC in January 2010.  They are the central tendencies of members of the FOMC, and according to them, the economy should have seen its boom in 2011. 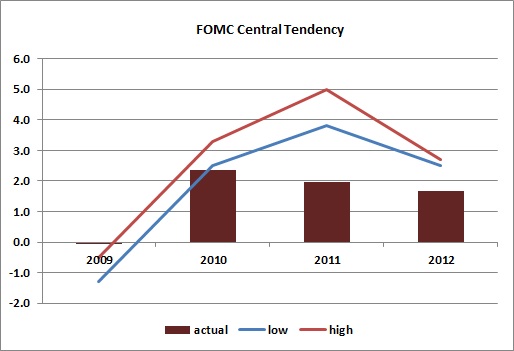 Forecasting is a notoriously tricky business, so one shouldn't bee too harsh when forecasts are off by a bit.  On the other hand, when you are grabbing the levers of the economy with both hands shouting that you're capable of driving this thing, you had better be somewhere in the neighborhood of where you said you were taking us.