Al Gore was always full of it

Steven Hayward has a nice post about the failure of those much ballyhooed climate models to actually predict climate.  The crux of the problem is that climate models, like economic forecasting models, are created by using past statistical relationships to determine time-invariant laws that can be used to project into the future.  It's relatively easy to get a model to fit the past (the in-sample fit), but the worth of a model is its ability to fit out of sample.

The problem arises because you can create a model that is a good fit for past data even though the model itself is not an accurate description of how the world works.  This can happen because the modeler can impose a structure that forces a good fit rather than being a good representation of the world's actual structure, which is probably a lot more complicated.

Now that IPPC climate models have been around for some time, there are enough observations to put them to the test.  Well, it turns out that the models have done a pretty crappy job in that they grossly overestimated the path for global mean temperature, which has been flat for over a decade.  Specifically, according to the models, the actual 2012 global mean temperature had a less than 5 percent chance of occurring.  And this was no fluke one-year event because the actual world has been trending this way for over a decade (see the chart below).  If the predictive power of these models collapses so quickly, then maybe we shouldn't rely on them as evidence that we have an urgent need to dramatically reduce our standard of living to fend off the chimera of global warming.  I've said before that climatologists remind me of macroeconomists, and I didn't mean that as a compliment to either group. 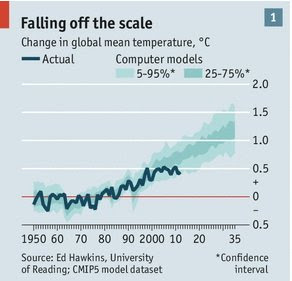