The President often tries to blame the weakness of the recovery on the depth of the recession that he inherited.  Others have claimed that recessions that are precipitated by a financial crisis just tend to be harder to recover from.  Both claims are absolute nonsense.

The chart below illustrates the tendency for severe recessions to be followed by strong recoveries. Specifically, long recessions tend to be followed by strong growth in the first year of recovery. One of my co-authors, Jeremy Piger, documented this bounce-back effect a few years ago. The same effect can be illustrated in the chart by replacing the length of the recession with the peak-to-trough real GDP decline. 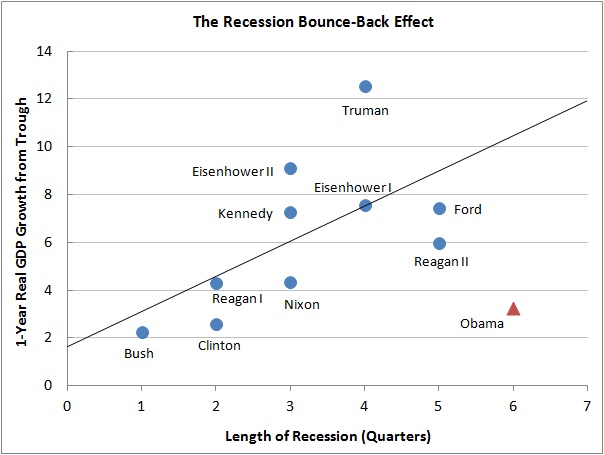 Notice that the Obama recovery is an outlier to this pattern.  Given the length of the Bush recession, previous experience would have predicted real GDP growth in the first year of the Obama recovery to have been several percentage points higher than it was.

As for the second claim, that financial recessions are special and more difficult to recover from, a recent paper by economists at the Federal Reserve finds that there is no such relationship. Their research also debunks the first claim:


Focusing specifically on the performance of output after the recession trough, we find little or no difference in the pace of output growth across types of recessions. In particular, banking and financial crisis do not affect the strength of the economic rebound, although these recessions are more severe, implying a sizable output loss. However, recovery does change with some characteristics of recession. Recoveries tend to be faster following deeper recessions, especially in emerging markets, and tend to be slower following long recessions.

Rather than blaming our anemic recovery on the hand he was dealt, the President and his apologists should perhaps consider the possibility that his policies might have something to do with it. Indeed, according to history, he was actually dealt a very strong hand in terms of the strength of the recovery, but he frittered it away.