The President needs to set higher standards for himself

Obama chose to focus on the fact that the rate of unemployment dropped from 8.2 percent from 8.1 percent, not the headline number showing the economy created only a net 115,000 jobs last month, below market expectations.
"After the worst economic crisis since the Great Depression, our businesses have now created more than 4.2 million jobs over the last 26 months (and) more than one million jobs in the last six months alone," Obama said at a school in the crucial election swing state of Virginia.

So, he's happy that 169 thousand more people left the labor market than found jobs, which is the only reason that the unemployment rate fell.  Imagine how happy he'd be if 500 thousand people just gave up looking for work.  The unemployment rate would plummet and really give him some good news to talk about.

The President is also happy with the net increase of 4.2 million private sector jobs over a 26 month period (or 163 thousand per month) and with the 1.2 million increase over the past six months (or 207 thousand per month).  Even at the rate of the past six months, it would take almost two more years just to reach the January 2008 level of private employment.  But that's not what is needed.  Because the population has grown, the relevant level of employment we need to achieve keeps rising over time.

As I have pointed out, even at the temporarily high rate of job growth of December 2011 to February 2012 (245 thousand per month), it might take until March 2021 to achieve full recovery (note that this is for total employment, not just private employment). Here's the chart from that post: 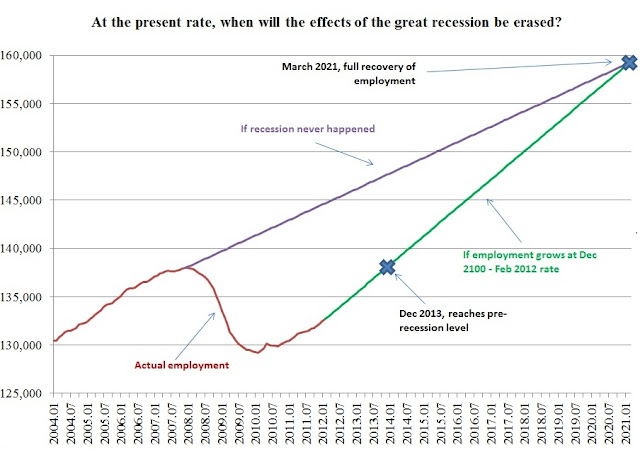