It's a dog eat dog world out there

You might have heard that President Obama's campaign has been trying to make hay out of Mitt Romney's old story about travelling with his dog on the roof of the family car. Well, it looks like that dog won't hunt. Here's a passage from the President's book:


With Lolo [Obama's stepfather], I learned how to eat small green chill peppers raw with dinner (plenty of rice), and, away from the dinner table, I was introduced to dog meat (tough), snake meat (tougher), and roasted grasshopper (crunchy).


It reminds us of the conclusion of the sci-fi tale "A Boy and His Dog": "It's a cookbook."

If you want a friend in Washington, don't eat him (credit to Jim Geraghty).

Happiness is a warm puppy, with a side of fries.

I wouldn't vote for that guy for dogcatcher.

Did you hear about the insomniac polyphagiac president? He lies awake at night wondering if there is a dog. Romney aide Erich Fehrnstrom got into the act last night, retweeting Axelrod's Obama-Bo snapshot from January with the comment: "In retrospect, a chilling photo." 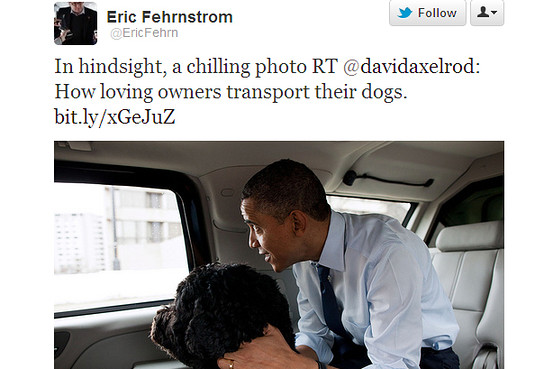