You might have heard that Rep. Paul Ryan released a budget plan that would reform the tax code (while being revenue-neutral) and restructure entitlement programs. President Obama released his budget plan a while back. It offered the opposite of tax reform (higher rates with bigger deductions for pet projects) and left entitlement as they are. Here are the two competing visions of America's future: 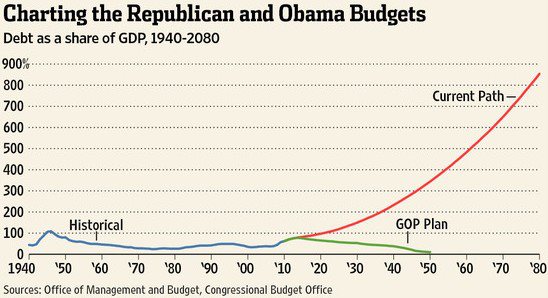 
Much of the discussion surrounding the budget will focus on numbers — debts, deficits, revenues, and so forth. And some will focus on the mechanics of the budget policy — reconciliation instructions, premium support, territorial tax systems, and the like.

But I think the most important discussion is about values. The House budget is a strong statement of social, economic, and political values. It is courageous at a time when presidential leadership is weak. It is honest at a time when Americans are misled into believing that they can keep “Medicare as we know it,” expand the welfare state, control the debt, remain safe, and . . . tax only the 1 percent.